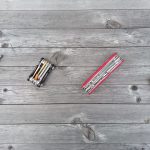 Men, especially Germans, like multi-tools. Must be a boy scout gene. But the right choice is not as easy as it seems to be.

The original Swiss army knives are world famous because of their superior quality. But since they are mostly sold to city people these days, they are often overloaded with features which are useless in the outdoor (like an USB stick or a ballpen). Leatherman-like tools, on the other side, want to be a toolset where the knife functionality is only one of many purposes. Their charm lies in the genius pliers, around which the typical tools are grouped. But that makes them rather bulky.

Carrying this sort of tools on your belt may look cool, but it’s not practical. The holster can get caught in the bush or by a rope, they sit directly over your hip bones (so that falling on them is not nice), and you have to mount/clip them all the time. It’s much easier to carry it in your pocket, secured with some thin rope. So you don’t want the biggest tool, and you prefer a slightly rounded form.

Don’t try to cover everything carrying a super duper Swiss knife with a gazillion of functions. The more there are, the less practical they turn out to be. Have you ever tried to remove a fishing hook or to saw a branch with one of these tools which are so tiny because they share the space with so many others? It looks ridiculous, and it won’t work. Better restrict yourself to a handful of options you really need, coming in a reasonable form and size.

Having said that, let’s focus on the blade first. After all, we’re talking about a knife. The biggest danger of foldable blades is that they might snap back and cut your finger. The second is that they are too small and cut your palm. So the number one criterium is a lock blade which is not too tiny.

What else is useful? Small scissors are standard, and their use is obvious. Can and bottle opener (though every man knows a dozen options to open a beer bottle), and – especially if you travel South Africa 🙂 – a corkscrew are also essential. To tighten something on your car, bike, boat, you want some screwdrivers, flat and cross, in different sizes since applying the wrong one damages the screw. A small set of pliers is very handy to bend a wire or to fix something small. Both screwdrivers and pliers must be solid. Pincers are recommended to remove a thorn. A saw blade is debatable, but it can be helpful for some camp constructions. The same applies to an awl if you have to repair heavy leather or fabric. Besides that, forget all the fish hook removers, magnifying glasses or nail files – they are useless crap.

Be flexible. You get the fish hook out of its place with the pliers. You remove a stone from a horse’s hoof with the screwdriver. Many of the special tools have been created by people who were told to invent new features so that the next multi-tool offers more options. Had they really been outdoors they would have learned that less is more.

Consider the material. You are outdoors, so the thing will get dirty and the blades will begin to stick. Lubricating oil is not an option as long as you want to cut your food, treat a wound or simply prevent your clothing from becoming all smeary. The alternative is to open all blades from time to time and to clean them in some water with soap. So you want stainless steel of the best quality available.

After having played around with several versions and learned from my mistakes, my personal choice has become the Victorinox Hercules 0.9043. It is a top quality, original Swiss knife of a size somewhere between a pocket knife and a standard Leatherman, so it fills your hand, giving you a good grip and allowing tools of a reasonable size. Its lock blade is bigger than usual, and it’s not overloaded but covers all the essentials. And because of that reasonable limitation, it is also not too expensive. Just the kind of thing you always have with you on serious hikes. 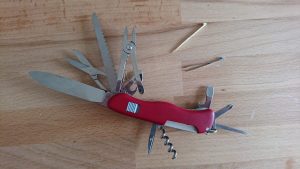 One last word about special tools. There are many for biking, fishing, paragliding, scuba diving – you name it. And they are smart; tool use and development were always one of the major human skills. But you’ll never get surprised by any of these activities. When you go diving, you know that in advance and have your diving gear (feel free to replace “diving” with “paragliding”, “fishing” or something else) with you. Luckily, the idea of multi-tools has been adapted for each of these fields, so you find the smartest special sets for every use. For that reason, I have exactly one compact, highly specialised multi-tool stored with each my scuba gear, on the MTB and in the paraglider repair kit. 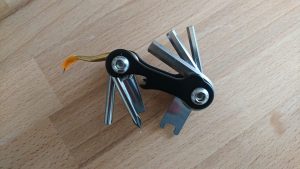 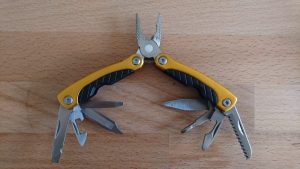