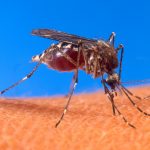 Malaria is a common threat for everyone travelling the central parts of Africa, especially in lower regions. Global warming also moves the ceiling for the endangered areas slowly upwards, so that you should reconsider rules of thumb like “no danger in the Highveld”. Over one million people die per year (which makes the Anopheles mosquito as a species more lethal than cobras and cape buffalos), and those who get infected often suffer a lifetime from the effects.

Doctors usually suggest prophylaxis, but there are two problems. First, the side effects of it are pretty strong, with the potential to sabotage your whole experience – and you will definitely have them (although you must get stung first to get malaria). Second, more and more drugs become useless due to increasing immunity of the parasites.

On the other hand, you would be perfectly safe if you don’t get stung in the first place. So it makes sense to consider the behaviour of the Anopheles mosquito. It becomes active at dawn, it gets attracted by light colours and body smell, and it thrives in moist environments. So if you wear dark, long-sleeved shirts in the evening, use insect repellents generously, sleep under mosquito nets and prefer dry areas, you become pretty safe. Furthermore, the only way for a mosquito to carry malaria is to feed on a person who has it already. If you are in a region without known malaria cases, there is no malaria for you – it’s as easy as that.

The other thing is the life cycle of the parasite in the human body. Once injected, it goes basically through 2 stages, and only the second (the human blood cell cycle) does the real damage. As long as it is in the first, which is called the liver stage and lasts 1-2 weeks, the treatment is very easy and safe. The real reason for many people to get really sick is that they misunderstand the first symptoms which are very similar to a cold so that the parasite reaches stage two.

So there is still no big problem if you get malaria treatment in 1-2 weeks after the first cold-like symptoms. Which offers another strategy: avoid getting stung, and if it happens, go to a doctor immediately after the first cold symptoms, telling him that you have been in a malaria risk zone.

There are also malaria test sets on the market which, if kept cool, last up to 6 months. Unfortunately a negative can still be false, but at least they will give you a positive if you do have the parasite even in its very early stage. So if the blood test – don’t worry, you need only one drop and there are needles included 🙂 – indicates a problem, run to a doc. This is always an option if one is in one week reach.

Last but not least there is some light at the end of the tunnel since the WHO is examining a promising malaria vaccination method. Here, people get infected with a genetically modified, thus weaker, form of the parasite which never makes it beyond the liver stage; not strong enough to cause harm, but sufficient to build up resistance in the body.

In a nutshell: malaria appears dangerous if you look at it from a statistic perspective. Once you’ve understood the background, it becomes less frightening. So far, I have never used malaria prophylaxis since I came to Africa the first time in 1981. Smart behaviour plus test sets on longer trips into endangered areas have given me enough peace of soul.