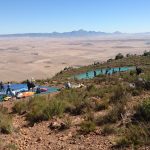 Porterville cracks know how to fly the ridge in strong conditions: high, safe, clear of the rocks. Big thermals emerge in the flat, so you follow the clouds and are prepared for major lift. But what are you doing when the season is over, the thermals are way more selective, the wind is no longer laminar and the sky is often completely blue?

When I settled to Porterville in late April I was not expecting much, yet looking forward to seeing the familiar faces again. After reuniting with Terina and Bradley we soon went up to discover that the ridge worked pretty well, looking really beautiful (no burnt slopes here this time) – only the free beer landing in the Flyers Lodge did not happen since the air in the flat part was dead. Even chasing a dusty on the last run could not save me from landing some hundred meters too early.

The next days became a new experience. Because wind and thermals were much weaker it was possible – and necessary – to fly very closely to the ridge. In some places bombing out would have happened on the slope itself because we struggled way too deep over it to reach a landing spot in the flats. Many other common Porterville rules had to be reconsidered as well. The infamous Bumpy was much smoother than usually, so I dared to fly that one much deeper than recommended as well. The same applied to the crossing to Citrusdal which you normally never try below 1.600m because of the lee rotor. This time it looked pretty reasonable to try it from the pass with only 1.200m. On the other hand, there was a good height to be gained in the flatland over Citrusdal and all the way to Constriction. Just a very different game to learn and to enjoy.

At this time of the year the site isn’t exactly crowded. Most of the time there is not a single glider in sight to indicate what’s going on. Together with blue thermals you feel really alone and fly very focused. There are also many geese, always flying perfect synchronous in pairs – amazing.

Crossing the pass northwards opens new sights. I had even found two other launch sites from the air which I didn’t know yet, and there are stunning places to fly at the northern end. Good lift stretches onto the plateau which, thus, can be crossed even far in the north, heading for Constriction – and again the absence of the strong sea breeze helps with these attempts. Landing there can be tricky, not because of the conditions, but since there is no signal. Nowhere, nope. Like so often a friendly farmer appeared as soon as I hit the ground, inviting me to his house where I could use the landline – and learn more about how everyone is suffering from the actual, terrible draught there.

After some days of wonderful flying, never less than 60km, I had to say goodbye one more time – not without hopping over to Piketberg after breakfast with the guys, of course. But now I know that Porterville is always worth a visit, even when the season is long over. 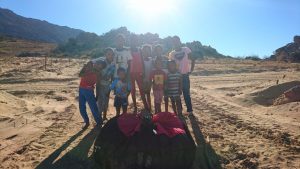